← back to
ears&eyes Records
Get fresh music recommendations delivered to your inbox every Friday.
We've updated our Terms of Use. You can review the changes here. 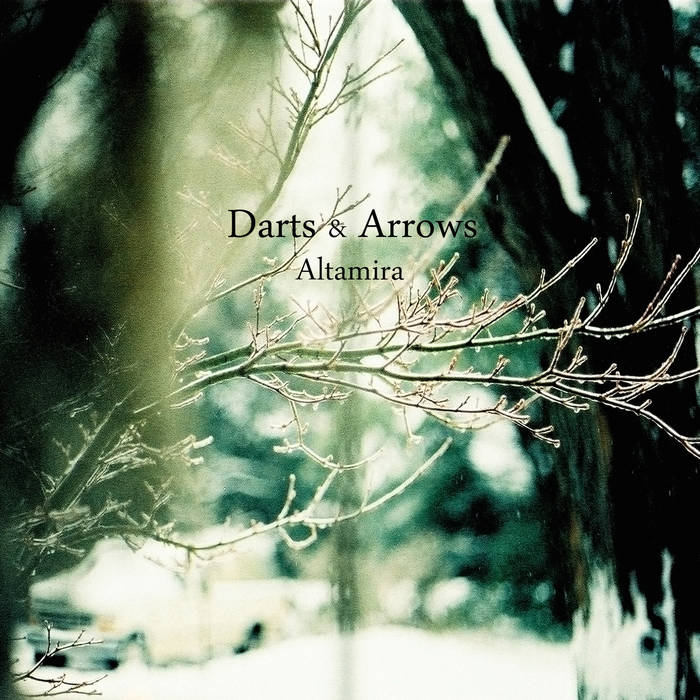 E M Snyder The way each song unfolds is an adventure. Imagine a 2am car ride around a mountain pass. Favorite track: Carried There & Ponytailed.

Jeff Kliment Simultaneously subdued and bristling with energy. Yet another fine example of the experimental/improv music scene in Chicago. Thank you ears&eyes, and everyone involved in making this great record.

One of the most promising bands on Chicago's experimental rock and new music scene in recent years, Darts & Arrows vaults into the forefront with its third album, "Altamira." Produced by Matt Lux (Rob Mazurek, Iron and Wine) for ears&eyes Records, it is the quartet's most fully realized effort, retaining the edgy vitality of their improvised work while painting beautifully textured sonic pictures on a series of through-composed pieces.

"Altamira" basks in mystery, conjuring visions of cool nightscapes, dreamy cloud formations and lightning storms. You can hear traces of flamenco and film noir, boom box rock and classical recitals, nursery rhymes and spiritual encounters. Among the highlights is "The Well-Wishers," adapted from MacKay’s string quartet of the same name, first performed by Renée Baker’s Chicago Modern Orchestra at the Conjuring Solids Festival: Strings Fluxus in 2014.

MacKay, a Pittsburgh native who cut his artistic teeth with such standout local players as Jason Ajemian, Greg Ward and Savoir Faire after moving to Chicago in 1998, has fully absorbed the anything-goes spirit of the city's dynamic music scene while coining a highly individual sound. His textural playing has elements of the great Bill Frisell, another guitarist with a wide-open vision.

Formed in 2006, Darts & Arrows grew out of MacKay's desire to create a post-millennial folk group, one that blurred the lines between folk, rock and jazz by combining a strong sense of melody with an equally strong awareness of atmospheric possibilities. Their 2010 debut album, "Bill MacKay and Darts & Arrows," featuring bassist Matthew Golombisky and drummer Charles Rumback, also boasted a graceful rhythmic touch and effortless flow.

D&A's 2012 follow-up, "Eyes of the Carnival," featuring Hernandez and Kirchner, tilted more toward art rock, Latin and western sounds, while abounding with luminous improvisations and what Downbeat called "an appealing sense of space and proportion" and "grooves with a limber sense of swing often missing in first generation jazz-rock."

"Altamira," which was mixed by Nick Broste, trombonist in Herculaneum, Mucca Pazza and James Falzone’s Klang, consolidates Darts & Arrow's sound while remaining open to influences ranging from British folk idol Nick Drake to Brazilian pop great Milton Nascimento, classical composer Bela Bartok to ultimate electric guitar slinger Jimi Hendrix. MacKay is one of those stream of consciousness soloists who, while being intensely clued in to the moment, engages with his bandmates on a high level.

"Altamira" is one of two new recordings sure to draw heaps of attention for him and Darts & Arrows. The album closely follows "Land of Plenty," his duo effort with singer-guitarist Ryley Walker, recorded during a month-long, Friday night residency at The Whistler in Chicago's Logan Square neighborhood. Among many other collaborators, he has played with cellist Katinka Kleijn, multi-instrumentalist LeRoy Bach, bassist Matt Lux, drummer Frank Rosaly and cellist-singer Khari Lemuel.

Guests appearances by Renee Baker (viola) & Nick Mazzarella (alto sax) on Evergreen, The Well-Wishers and I Won’t Forget You

Bill MacKay is a Chicago based guitarist-composer-vocalist-improviser. He has energized the experimental folk, rock, and avant-garde scenes with his radiant songs, and creative and unpredictable approach to the guitar.

Bandcamp Daily  your guide to the world of Bandcamp